For all intents and purposes, our bathroom renovation is complete! But I think there are a few more decorating details that we need to do to really call it done.

A couple weekends ago, we got the plank wall cut and mounted. My concern with this wall was that it wouldn’t match the grey tile that we used on the tub surround, but I wanted a warmer element that would make the room feel less cool and grey. We stained the planks with a mixture of classic grey and special walnut Minwax stains, which made it look like weathered wood.

We installed the pieces with a few dots of construction adhesive on the back of each, plus a few nails with the air gun. We left a gap between all of them using pennies to space the planks, and worked our way up from the bottom. The last plank at the ceiling required some tricky trimming lengthwise, because of course our ceiling isn’t level, and while it isn’t perfect I don’t think the slightly not-straight edge is very noticeable.

Here’s pictures of the progress:

And the finished product:

And the tub hardware that we finally got installed:

So, its obviously brown and the tile is obviously grey, but I don’t dislike it – I think it just needs to be integrated better with the rest of the room. So our idea to do this is to make some small wooden shelves over the toilet, using wood with stain to match the planks and with industrial style brackets similar to the ones in the kitchen:

We’ll probably do 2 shelves, and Home Depot actually sells these brackets online now (of course, after we searched forever and spent a ton of money to get the brackets for our kitchen!). I think adding these shelves will bring the wood tone forward in the room, and not make the plank wall look so isolated.

Also, after our little bookshelf in the bathroom is no longer covered in my garden seedlings, the wood on that piece will also tie into the room:

I also have pictures of our threshold to show. We ‘stained’ this with opaque grey deck stain – not an ideal color, but we couldn’t come up with any options that we thought would match better that weren’t expensive (such as a marble slab). And, before it was nailed down I got a picture of the routing and trimming work Nik did on this to make it fit perfectly around the cement board and carpet that this was sitting between: 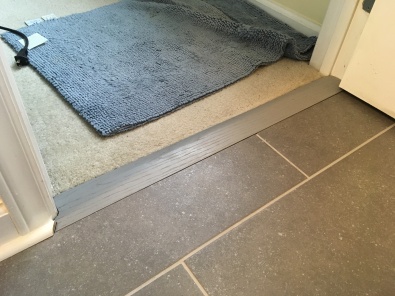 There is one more task I’d like to do – both in this bathroom and our guest bathroom. All our fixtures are now brushed nickel, except the tub drain and overflow:

That rusty, old tub drain was supposed to be fixed (as per our contract) by the seller when we bought our home, and somehow he worked his way out of that agreement and just bought a cheap new stopper which probably cost him $3.99. The drain plate above is an easy swap, as is the drain stopper, but the drain itself is a more difficult story. Depending on the competency of the person who installed it and how well they adhered it to the piping under the tub, sometimes the only way to remove these is to remove the tub since they’re usually threaded into the pipes with plumbers putty. We’re going to attempt to use either a short-cut method (needle nosed pliers and a wrench), or purchase a drain extractor tool to remove the drain. If we can get it to budge, we’ll put in a brushed nickel set. And if not, it will stay as is!

In other news, work on the banisters and balusters is underway. I have one more coat of white paint for the balusters to go, and after much trial and error, Nik finally got the measurements and angles figured out to move forward with installing the banister on the bottom part of the steps that will span the column to the wall. Once we have the banisters cut to size, we’ll give them a good sanding followed by stain and sealing, which is on the agenda for next weekend.