Well, we/re officially moved in to the new house as of a couple weeks ago, and our main goal before moving in was to have the floors done in the living room and dining room (kitchen reno will come later). We are about 90% there…all the boards are down, but we haven’t put in border quarter round or transition pieces to really hold it all in place. There are still a few areas we might want to pull up the floor and work on evening out the subfloor a little more so this will be much easier to do without those last pieces in place. We wanted to “live” on the floor for a little bit with furniture all in place and figure out if there are still problem areas.

The floors are Home Legend Kinsey Hickory (Home Depot) in engineered click lock hardwood. This means that they have a real wood top veneer, and the core is high density fiberboard (HDF) that has a click-and-lock tongue and groove system, so they click into place rather than having to be nailed or glued in place. They work best in a floating floor application, which is what we did. Our flooring was about $2.98/sq foot, but I used a 10% off coupon so we got a deal on it! I showed you what the floors looked like out of the box, stacked in the living room acclimating:

We started in the dining room against the back wall. First we put down 2 mil foam underlayment, which functions partially as a moisture barrier (although this is not entirely necessary on a wood subfloor like we had), but also also as a sound barrier (so it doesn’t sound like a ping pong table when you walk on the floors) and a cushion so the floors are comfortable to stand and walk on. We bought our product from Amazon based on good reviews, and the price which was about half the price of this quality foam underlayment from Home Depot. It cost about $0.32/sq foot. We laid this down in strips, and it had edge adhesive that allowed us to connect rows to eachother.

So we started the floors, being sure to leave at least 6″ gaps between plank ends in adjoining rows, and trying to make sure our planks weren’t forming step patterns or ending/starting rows with pieces <6″, while at the same time trying to minimize waste pieces. Basically, we became floor tetris experts!

As we built across the dining room, we built into the laundry room hallway which was a little tricky, and was the first time we had to rip pieces lengthwise with the table saw, as opposed to just chopping the pieces with the miter saw for the end of rows. We also used our jigsaw for some complex cuts such as fitting pieces into the bathroom/laundry room doorway and around air vents.

We learned our lesson about saw blades, and after trying to use a cheap blade that was cutting poorly and was really hard to work with, Nik went back to Lowe’s and purchased some carbide tipped blades that were amazing and so easy to work with despite their $40-50 price tags. 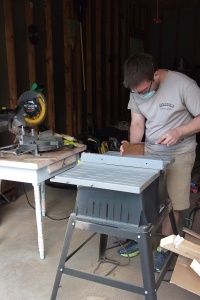 Once we had made it almost to the last row of the dining room, we realized our last row only had about an inch of space before the wall. Oops. Nik got the multitool out and trimmed up the baseboard on this wall so the floor could extend under the baseboard, leaving an expansion gap against the wall instead of against the baseboard in this spot. This bought us a little extra width that he could rip on the table saw. 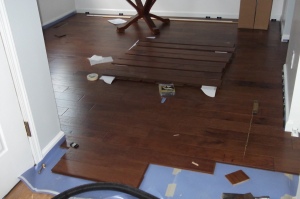 So the dining room was done, now onto the living room, which we started on the opposite wall since we were putting a transition piece inbetween these two rooms.

This room went pretty smoothly until we got within a foot or two of the final wall. Then Nik noticed the floor was depressing and popping up when walked on, and we instantly knew the culprit of this problem – we’d noticed a portion of the subfloor was not level in this area, in particular a high spot where two pieces of the subfloor plywood came together in a small peak. We initially tried adding an extra layer of foam underlayment in the resulting low spots to see if this solved the problem. We pulled up the floor and did this, and it improved those spots, but then created more problem spots in the new low areas that were created from the foam additions. Hmm. My dad suggested if we go this route of adding extra “filler” in the low spots, to use a more solid substrate, like the thin gray chicken wire, or something like that. Nik’s dad suggested going into the crawlspace, adding an extra perpendicular floor joist and screwing the high spot down into this to pull it down more and reduce the high spot. Nik ventured into the crawlspace Saturday morning to assess the situation, and of course there’s a pillar surrounded by ventilation right where the high spot is, so that option was out. One other option we had to try before going back to adding some sort of filler was actually sanding the subfloor down with a belt sander, one of which we had just acquired from Nik’s family. We begrudgingly got this out, not thrilled about the mess we anticipated it would make inside. But, it worked like a charm and easily cut down probably about an eighth of an inch in the problem areas which totally improved the problem! And the mess wasn’t even that bad – we just left the shop vac running behind the belt sander to catch saw dust. Afterwards, it was much more level which was cause for celebration. 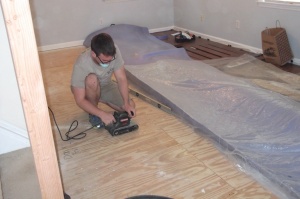 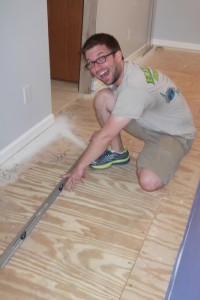 We replaced the planks and finished up the last few rows against that wall, then did the entry way up to the dining room border. Then Nik had to test it out for dancing, and it passed =)

So, it’s mostly done except for adding transition pieces – this is an example of what these pieces look like and how they leave room for a hidden expansion gap underneath them.

We’ll have matching ones that blend with the floor color, and these (or some form of transition piece – there’s multiple shape options) will go around the fireplace hearth, in the doorways to the kitchen, laundry room, bathroom, and in the opening between the entryway and the dining room. I’m noticing some floor movement around the front door still, so that’s the one area we might go back and tackle with the belt sander before calling this job done.

Here’s me putting in the last piece, and a picture of our living room with some haphazard furniture in it after the move – it feels even better and solid with some stuff on the floor!

Overall, I’m really impressed with the quality and look of the floors. They’re beautiful and they feel nice walking on them (other than the couple of low spots near the front door now). The hardest parts were cutting detail cuts or doing the lengthwise rips when we got to a long wall, and cutting lengths appropriately so we wouldn’t end up with steps between rows, or plank ends that lined up weird with neighboring rows. All in all, this hardwood floor (including the kitchen that will be done in the future) cost us about $2200 for materials for about 600 square feet downstairs, which I think is a great deal. Of course we needed the saws and blades to cut it which was about another $500 but we wanted some more woodworking tools for our furniture stuff anyway so we’re not counting this in the expense. To get this floor professionally installed, I’m guessing the cost would’ve been closer to $4000-5000, and I’m curious how much attention they would’ve paid to details, such as low or high areas in the subfloor, leaving well-measured expansion gaps, etc.

On another note, a large portion of our brush pile was removed by a big truck (this is me spying on it from the bathroom window). 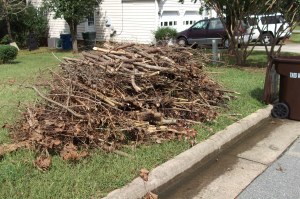 And we’ve had even more wildlife, and some very happy flowers, as well as some God-awful monsters (guess which one I’m referring to!) make appearances. 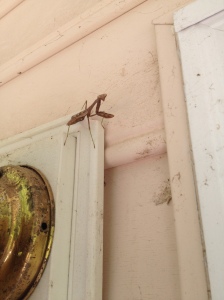 Next on our list is finishing up the floor molding and transition pieces and finishing the drywall on the new wall and encasing the column. So that’ll be the next update – we should be more motivated to get work done this coming weekend since the weather won’t be rain, rain, and more rain!