Last week I said I’d show you our closet project when it was done, and we (Nik, really) finally finished it up this weekend. The catastrophe that sparked this project was when one side of the shelving in our master bedroom closet fell off the walls: 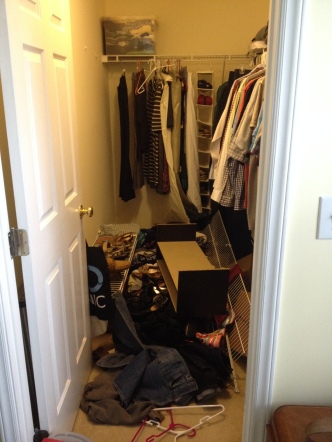 As disastrous as it was, it made us realize that our closet is so much more functional with extra space on one side. Plus, my problem of piling half worn clothes on the floor outside of the closet has gotten worse and worse (like when you wear something that you can get away with wearing again before washing…exercise clothes, lounge-around-the-house clothes, etc…don’t judge me). So I needed a place to easily hang things (I know, it’s not hard to just put them on a hanger, but this is apparently beyond me).

We had some scrap pallet wood from when our flooring shipment came in. I checked the code printed on the pallet to make sure the wood wasn’t harmful. Some pallet wood contains bad chemicals like fungicides, so you can always look at the code printed on the wood and figure out what is in yours. You can see ours says HT (for heat treated, harmless), CN (from China, and the numbers refer to the particular warehouse in China), and DB (de-barked, also harmless). So, we were good to go!

I pried a few pieces off and sanded them down a bit, then Nik came in and cut pieces with the miter saw so we could create three 4′ long rows. 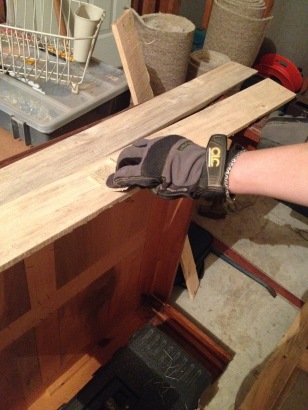 Then we tried out pretty much every stain color we had to see what we liked best. We ended up choosing classic gray. So we stained the pieces, and then I gave them 3 good coats of water-based poly, with a sanding between the 2nd and 3rd coats. I wanted them smooth so as not to snag my clothes.

Next, we had to figure out how to mount them to a wall, and attaching a couple pieces of backboard wood directly to the studs seemed to be the best option. And Nik got to use his fancy new stud finder that I just got him.

Next, we debated for approximately 2 hours about where we wanted to put screws into the stained pallet boards, since there were already some natural holes there, so did we want to use those, or did we like the natural holes showing and we should just make new screw holes…yes, these are the types of questions that some PhD scientists think about at night. We decided on new holes for the screws. This was the planned layout, with hooks:

And here’s the final product, installed in the closet: 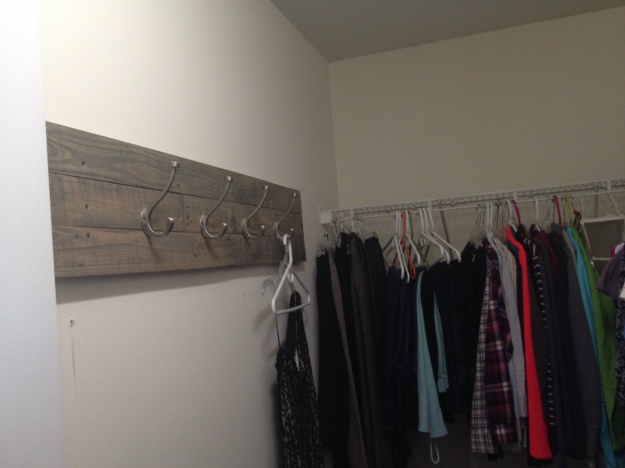 We still need to fill the holes in the drywall from when the previous shelving ripped out…but all in all, I think it’s sleek and very functional. Sadly, I don’t think I’ll be seeing much of it since I already have clothes heaped on all of the hangers =)

The cost of this project was about $20 or $25 for the 4 hangers, everything else (Screws, stain, poly, sandpaper, brushes) we already had on hand. We could’ve bought pre-made wall mount hangers at the store for about the same price and weeks less work (we didn’t actually work on it for weeks…but from start to finish we did procrastinate on finishing up this project for about a month). But I think making our own was more fun!

Nik dragged this solid pine table out of the furniture dumpster months ago, and we finally wrapped it up on Monday. It started out like this:

And we stained it with Minwax weathered gray stain and sealed it up:

The legs and table skirt were painted off white:

And we put it all together. One of the legs was missing the attachment bolt, so we figured out how to use some L brackets to attach that leg firmly. Here’s how it turned out:

The past week or so has been spent painting and painting and painting the outside of that secretary. I’m halfway convinced that thing is made out of real living flesh, because as soon as you paint a coat of paint (mind you, this is good quality paint-and-primer-in-one paint that “should” cover in 1-2 coats) the red color of the wood starts bleeding through the paint and you’re back at square one. Nik thinks we’ve put on 4-5 coats of paint OVER the coat of primer, and we’re still seeing a red tinge. One more coat it is… Anyway, again here is what is looked like before and after primer:

And with a coat (or several) of paint:

We’re also painting the front desk cover and the cubby compartments white but I don’t have a picture of those. Oh, and I also skipped telling you that we learned about something new called underlayment. This is 5/16″ thin plywood that is what usually makes up the bottom of a drawer, and in the case of this secretary, the back panel. The very bottom drawer and the back of this piece were disintegrating and warped, so we popped out the old wood and got two pieces of underlayment cut to size at Home Depot. The whole 4’x8′ sheet was only $12. The drawer piece slid right into place, and the back piece will be nailed on simple as that. This was an unexpectedly easy fix for this old piece of furniture! So, we’re getting close, just another coat or two of paint and then touching up the stained part (after all that painting its impossible that none of it got outside the lines!). We’ll be using water-based poly to seal up the entire piece then we’ll attach the cubbies and the front panel. I think we’re going to try to clean up the old hardware and put those handles back on because they’re pretty unique but we’ll see how that goes. On another note, we’ve made some headway with a new project that Nik (literally) dug out of the large furniture dumpster in our neighborhood. He found a large circular pine table and 4 legs to go with it (no leaf unfortunately).

Here’s the before pictures:

And then he sanded it down (ignore the blue paint, we were testing out some exterior paint on it but we sanded that off too):

And we used the classic grey from the middle drawer in the secretary to stain this. We were going to use dark walnut and then I had the idea to use the classic grey and I love how it turned out!

Apparently our deck is an almost identical color so I’m sorry that it looks like it is camouflaged with the ground…Now we’re priming and painting the table skirt (under the round top) and the legs a cream color.

The legs are plain and ugly, but hey, this table was free. Hopefully someone can overlook that and consider it a lovely weathered “country” table. And for one more thing to leave you with, I finally finished my pistachio shell art and I love how it came out! I never knew I could be so crafty (of course using the creativity and detailed guide of someone else).