This weekend we got a big job done in the kitchen: installing the microwave! I love the new location mounted over the oven, and even without the rest of the kitchen put back together, it already feels roomier without our old clunky white one taking up a whole counter.

Before I write about the microwave, I realized I never posted some pictures of our trip to Seagrove, NC last weekend so I’ll put a few of those in. The bed and breakfast we stayed at was so quaint and had wonderful hostesses, who insisted on taking our picture on the front porch: 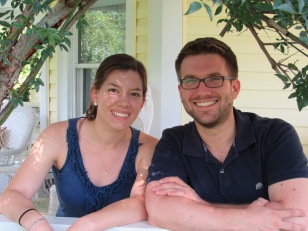 We explored the property as well, which had some old log cabins out back: 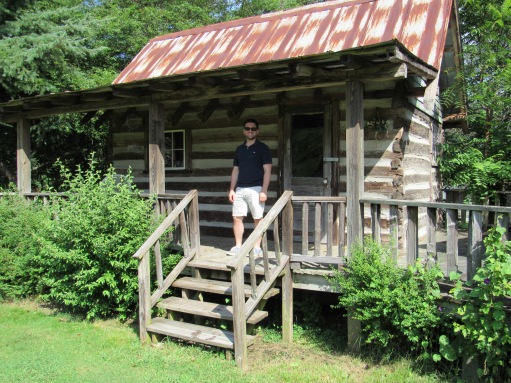 And we bought lots of beautiful pottery, in addition to doing some relaxing:

On to this weekend, we had a full day planned on Saturday with a canoe trip with some friends down the Haw River about 30 minutes from our house.

It poured the night before so the water was actually pretty high, and the rapids were a bit terrifying (I may have shrieked several times as we almost flipped our canoe!). Hopefully cooperation in a tandem canoe is not an indication for a successful marriage since we argued our way down every single rapid. We stopped for lunch, and got to jump in the water and float down a small rapid – lots of fun despite the churned up water!

Saturday afternoon we had a barbecue to go to for Nik’s fellowship program, so when Sunday came around we got right to business on the kitchen. I spent the morning finally painting our stair column which looks pretty nice. It needs a second coat, then we’ll be ready to think about putting the banister in. Then I intermittently helped Nik with the microwave install, and also got the new cabinet sanded and primed.

I don’t know about you other ladies, but I think a man with a power tool in hand, patiently reading an installation guide while getting ready to install your appliance free of charge is about as handsome as they get =P

We had some mild issues with the electrical – if you recall, our previous stove vent hood was hardwired in, so Nik bought an outlet box and got some advice from an electrical-savvy friend who helped us determine we had the right wire gauge to create a safe outlet box that we could plug the microwave into. The issue was the microwave plug was so bulky, it wouldn’t fit to plug in behind the microwave if the outlet was flush with the wall like they usually are. Luckily, there was already a pretty big chunk of drywall missing behind the microwave, so we just ended up recessing the outlet box and plug totally into the wall space. A little unconventional, but it should be safe.

At the end of the day, this is what we had:

We’re ambitiously planning to either start on the floors this coming weekend, or do the back splash. Nik is pretty busy with some other things on Sunday, so we’ll see what we get done.