Well, we didn’t get to tiling last weekend but we did manage to spend about $350 on tile, special mortar, mirror mounting brackets, a few other things we needed at Lowe’s. The tile that got us was the stupid bullnose tiles for the edge. You think, oh the edge, that’s not that much, it’ll be cheap. But when we actually added it up, we needed 22 linear feet of edging, and at $3.58 per foot that definitely added up. We also bought 6 boxes of 7 tiles, 2 square feet each at $1.99/sq foot, knowing we’ll have some extra that we can return. And we finally picked our accent tile, which will go around the shower in a thin band, and also fill the back of our niche. I think strongly contrasting accent tile is trending out, so I wanted something neutral but still noticeable. Our tile choice had an option for small mosaic tiles in a 12″ square pack, so we decided our accent line would be 2 rows of this. Something slightly different, but not too eye catching: 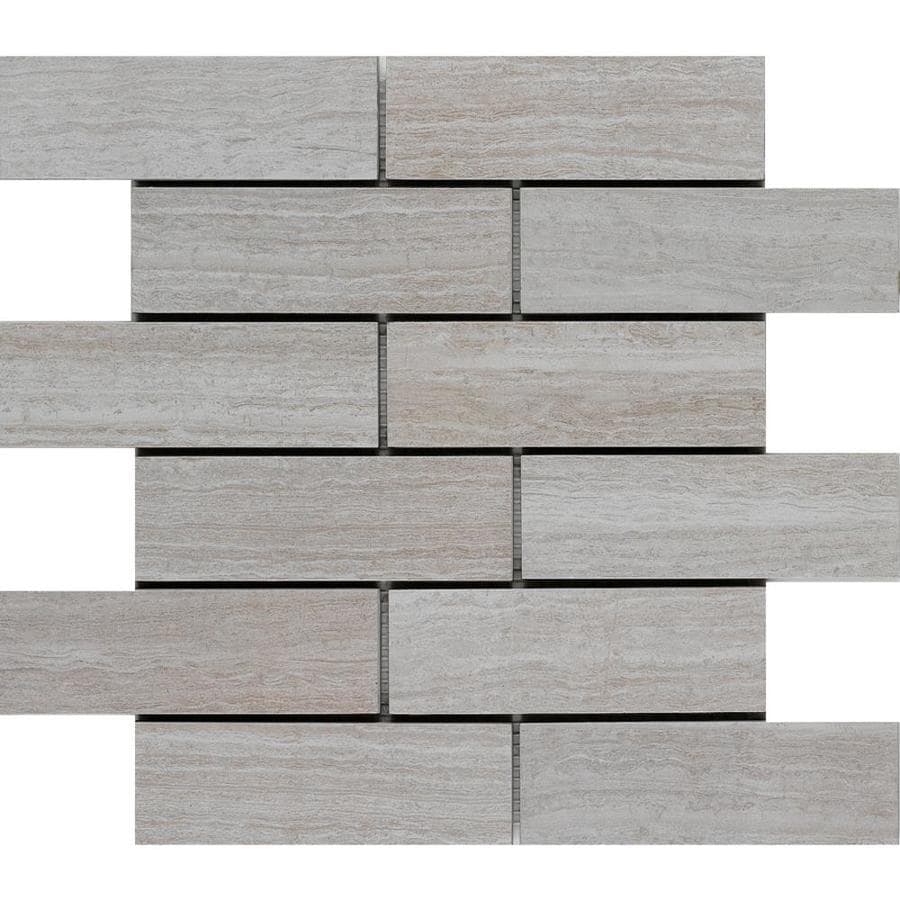 So most of the shower will be horizontal 12×24″ tiles of that color, with the small accent. I even found a picture on the Lowe’s website of the two next to each other:

To finish prepping the shower, I showed last time how we mortared all the seams with alkali tape. Then last Saturday we busted out the Red Guard waterproofing membrane. This stuff was like painting with hot pink pudding. We stirred it then started with a cheap brush doing all the corners and edges, then went at it with a very bushy 3/4″ nap roller to coat the rest.

It dries red, so you know when it’s ready for another coat. We had plenty for a second coat, which is when they officially declare it “waterproof” vs just water resistant. I’ve never used the ‘As seen on TV’ Flex Seal product, but I imagine this is very similar. It was flexible, and seemed like a thin layer of textured plastic when dry. The gallon cost $50, and we had about 1/4th of the pail left over.

After red guard, we went around with a silicone caulk gun to fill the gap between the shower pan and the bottom of the cement board. One of these gaps was at least a good 1/4″, which took several caulk applications to make me feel good about it. Tile will cover over this, and then we’ll put one more caulk line between the tile and the shower pan. Extra caulk sealing certainly never hurt anyone.

I also took some pictures of our newly-mounted mirrors, and the vanity with all the hardware and doors freshly attached. We had these handles left over from a previous project, and they don’t 100% match the faucets despite their color also being called ‘brushed nickel’, but for free I’ll take them! We still need to do some painting on this wall, since we thought we were rehanging the giant mirror, so that will have to wait until we finish painting the area around the shower:

We decided to stay home for the long weekend, and buckle down on the shower. In theory, we should be able to get the tile mounted and grouted, with some time left over for Labor day drinks!