If you hadn’t noticed, the past couple weeks we’ve taken a break from house work so I haven’t had anything to write about. Nik was in Nashville for a week getting training in imaging mass spectrometry, then I spent a weekend in DC visiting friends, and then I spent a week in New Orleans at the American Association for Cancer Research annual meeting which was a great trip. There were over 19,000 people at the AACR meeting and I learned a bunch of stuff, and Joe Biden spoke about the state of cancer research funding at the closing ceremony which was interesting and inspiring. We also did some touristy things with the lab crew I went with, including an air boat tour in which I got to hold a baby alligator:

And we rode the St. Charles trolley and toured the beautiful garden district:

And we also checked out some of the iconic New Orleans cemeteries, which are all built above ground since the city is under sea level, so if you bury the caskets they come floating on up out of the soil over time.

On my last day there, I had a later flight getting home so I spent some time at the Audobon Insectarium and got to see some cool bugs and butterflies. I think I was the only adult there without a child, but I enjoyed myself!

So, we were both back in town this weekend. I had a race that our friend came down from DC to run with me, but on Sunday we had some free time to get back to things. It didn’t seem like enough time to get started on our kitchen cabinets, so Nik got to work on a project he’s been wanting to do for a while, which is a front porch bench. I had seen a pic of a mid-century themed slatted bench, and I wanted one, but not for $300+:

So Nik pulled out some of the old playset wood that has been sitting under our back deck and started making some measurements and cuts.

At the end of the day we ended up with this:

We’re still figuring out how to do the legs and how to attach it all together, but I like how it looks so far! While Nik was messing with this, I went to work stripping/sanding some other old furniture pieces that have been sitting in the garage for a while that will go in our bathroom and dining room. I’ll give an update on those once they’re further along.

I also bought a rug for the living room a few weeks ago…it’s a very nice rug, and was a good price at Home Goods. We’re debating if we like the light color, and it’s a little bigger than we wanted, but I still like it and the effort to return it to the store may be swaying our opinion to keep it. The back of this room doesn’t get a lot of sun, so we thought a nice bright rug would keep the space looking light and airy. Plus, I think the wood floors are a nice contrast.

I had to try it out for plushness as well, and even though it’s wool and I’m kind of sensitive to that, it passed:

So, we have a few more days to decide about that…any thoughts?

And finally, we have a new nature update from our yard. We’ve noticed we have a red shouldered hawk (or two?) that seems to be living in our back woods somewhere. He’s made an appearance a bunch of times, and we always know when he’s coming because the squirrels go insane calling out to each other to warn of the danger. He’s maybe a foot or a foot and a half tall, and we got some good pictures of him with my camera. I like his little feet.

And I like this one, where he’s looking right at the camera with a foot in the air!

Our new bird feeder is also getting lots of attention from cardinals and chickadees, and of course the ninja squirrels who manage to get onto the feeder despite my attempts at making it squirrel proof.

This coming weekend will hopefully be productive, and if the weather’s nice maybe we’ll finally get the cabinets underway.

This week we’ve made a lot of progress with our trim. I’m happy to say everything is filled and sanded (except one side of the column that needs a bit more filler). Now it’s just doing the painting and it’ll be done! The china cabinet is also finished, with the last coat of water-based poly I put on the stained parts last night. It just needs to be put together after we give it a good 24 hours of drying time.

That doesn’t sound like too much progress for a whole weekend, but with a few huge purchases we made this week that I’ll tell you about, I’m feeling like our house is SO much closer to being put together!

Last Saturday we dragged ourselves out to Raleigh again and went to 4 furniture stores (well, more like 3 stores I guess. One of them we walked in, looked at a few sofa price tags and immediately realized we were poor, so I won’t count those 10 seconds as a full store!). We really wanted a sofa-chaise sectional since we felt like that would give us a little extra seating space in our awkwardly-shaped living room. The tiny wall we want to put the sofa on is exactly 84.5″, and we found that most couches or sofa-chaise sectionals we liked were around 90″. And many of the smaller ones that would have fit just looked like cheap dorm room furniture to me. But we finally found one that had a little style, had a sofa-chaise, fit our wall, and was in our budget at Ashley Furniture. Here’s the stock photo of it: 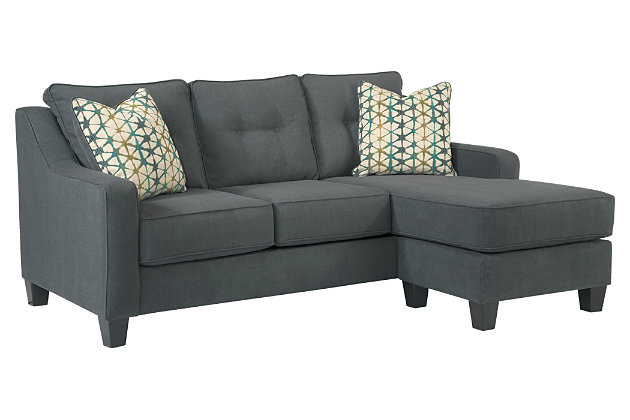 We liked the little buttons on the cushions, the fact that it was raised off the ground on some feet, and the curved arms, and the color was nice too – a darkish gray. With delivery and taxes and everything it came to around $900, which was under my goal of $1000.

Next, we went to this crazy home store in Durham called At Home – it’s a combination of Michael’s craft store, Ikea, and the biggest warehouse of home decor things you’ve ever seen. It’s probably bigger than Home Depot, just to give some perspective. A lot of the stuff in there isn’t the best quality, but we were able to find a nice wool rug for the dining room for $150, and some ideas for arm chairs for more seating in the living room. Here’s the rug we picked out:

And finally, if you thought that was all the money we spent this week, I hate to disappoint you (well, you’re probably not disappointed, but my bank account might be). We also bought a kitchen suite! We’re not quite ready to redo our kitchen yet, but why wait to start enjoying new appliances? We figured out we can easily move them ourselves when it comes time to do the floor under the fridge and stove, and I don’t think we’re installing wood floor under the dishwasher, so it can stay where it is once it’s installed. We got a Kenmore suite from Sears since a lot of the Kenmore stuff was on super sale right now, then we got a 5% discount for buying 3 things over $400, AND we had a 10% coupon for Sears from when we moved that was only good till the end of January. You won’t believe how cheap we got these things…we saved over 50% off the original price for some of the items!

And it’s a convection oven (since the convection one was on super sale, and was the same price as the non-convection one)! My baking will be getting even better soon! We had a PSNC guy come out a few months ago and give us a quote for giving our stove a gas line, and it was about $900 extra…which is why we decided to stay with electric. So the original price on this was $999 and we paid $469.

And finally, our dishwasher:

We were deciding between this one and one that didn’t have a handle that stuck out a couple inches and instead had the control panel visible on the front. The other one wasn’t as sleek looking and was a slightly lower-quality model, so we decided to get this one. And it is all stainless steel inside so it looks fancy in there too! This one was $879 originally and we paid $494. But honestly, I probably would’ve paid the full $879 to get rid of the one we have that actually sounds like the Titanic sinking into the ocean when it runs. We should record it next time we run it, just for memories. We didn’t pay for installation of the dishwasher…the nice sales guy seemed to have enough faith that we could figure it out ourselves, but he said if we have issues they can send a guy to finish the job.

So, you really can’t blame us for biting the bullet and getting this purchase out of the way with the crazy low prices we got! It’s all getting delivered next Friday AND they’ll haul away our old appliances for an extra $10. Done and done.

I feel like it’s all coming together now. There probably aren’t too many more substantial purchases we’ll have to make in the immediate future to get our house looking nice, so I’m glad to have this behind us!