I was looking back through my summer calendar, and almost laughed out loud when I saw that this renovation was scheduled to be completed in July. HAHA. Makes me laugh again. Sadly, we are still working on this bathroom. Which is partly our fault, since we’ve had plenty of weekend days we just didn’t FEEL like doing work on it, so we didn’t. Fortunately, the light at the end of the tunnel became a lot brighter last weekend with the installation of the shower door, and now most of what’s left is purely cosmetic.

The most difficult part of finishing up the shower has been patching the space between the tile and the drywall, since the cement board under the drywall (the red and darker grey area) was about 1/8-1/4″ thinner than the surrounding drywall:

This has meant applying a thin coat of joint compound, sanding till smooth, then repeating approximately 932 times:

I think it is ALMOST there – maybe 1 more coat this weekend, and we’ll be ready for wall paint. We got all the door framing up last weekend, including about 2 hours that it took for Nik to drill 4 holes through hard porcelain tile (and the mortar and cement board underneath it!). After all that drilling, we forgot to take a picture of Nik’s perfect drill holes, but we did take one of the final frame installation: 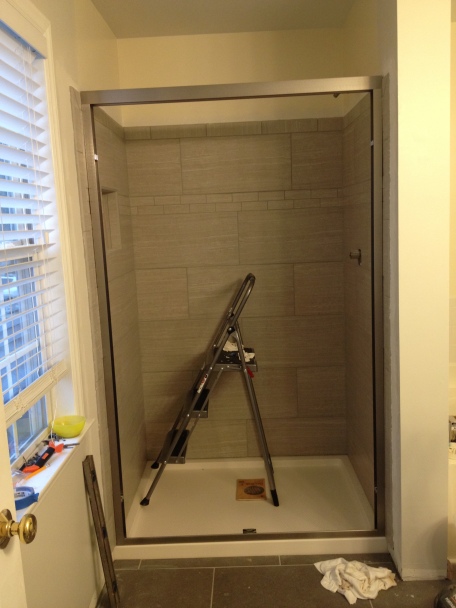 We haven’t actually put the doors on yet, just to make the sanding/painting part easier, but at this point it’s just lifting the door panels into place when we’re ready for them:

Nik also finished caulking and installing the shower drain the other weekend, so that is all done: 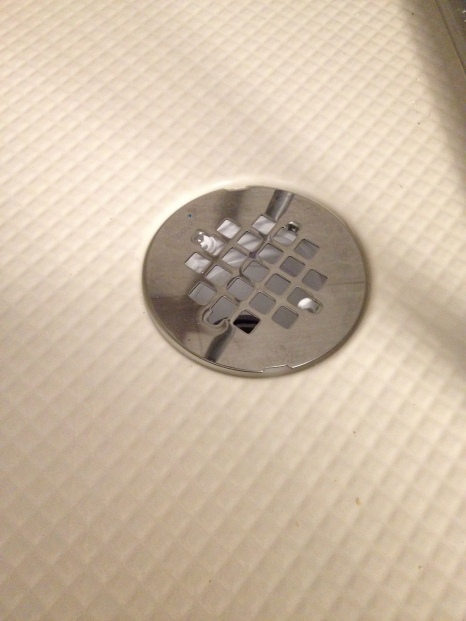 Another problem we had to tackle was figuring out how to caulk between the shower pan and the first row of tiles. This was fine on the right side of the shower, where this gap was a perfectly caulkable size of about 1/8″ thick. However, this gap was significantly larger on the left side of the shower, closer to 1/2″. We couldn’t come up with a better strategy for filling it, so I just squirted in several thick layers of clear silicone caulk. It seems successfully filled at this point, but when clear caulk is that thick, it’s not really very clear.

Once the door is in place, I’m sure it won’t be noticeable. We’ll just have to clean it regularly and maybe replace it every year if icky stuff grows on it.

Next up is attaching the faucet hardware, which we need to pick up from the store. We’ll probably match the sink hardware, unless we find a set that has a hose attached to the shower head that looks decent. Our new greyhound, Gunnar, appears to lack all sense of agility and grace, so we’re thinking that future baths will probably be way easier in a walk-in shower vs having to help him navigate his bony, long, awkward legs over a tub wall. So it could make more sense to put a hose shower head in there, and they do make some pretty nice looking ones now. Here’s those long, bony legs I’m talking about! 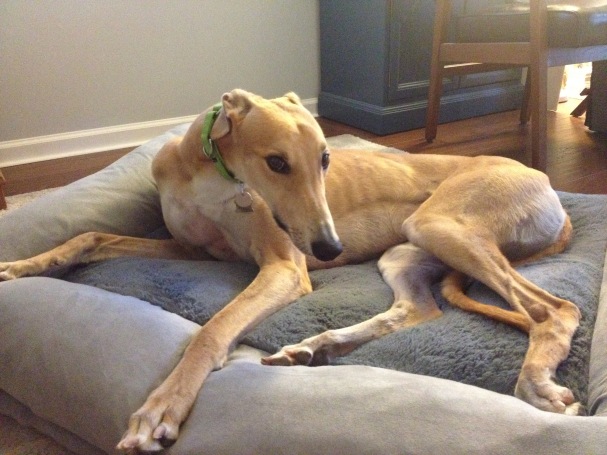 After those tasks are done, the last few things will be installing the remaining floor trim around the shower and the adjoining walls, which is already painted and ready to go. Although Gunnar doesn’t like people in driveways a hundred yards away, he seems to have no fear of loud noises or power tools, so he’s been extremely tolerant of, if not interested to the point of being annoying, in our bathroom renovation. He’ll probably love the air compressor and nail gun for installing the trim!  We also need to fashion some type of threshold for the room. Once we’re done with those things, we can move back into the bathroom, and at that point we’ll also assess if we want to do any sort of cosmetic tiling around the tub to tie it into the room, and the accent wall I had envisioned behind the tub. This tiling will be a lot easier than the shower tiling since the cosmetic tiles can go right over the existing drywall.

Well, the count down to the end has begun. We’re hosting my family for Thanksgiving this year, so with extra people in the house, this puts a hard deadline on us to get this renovation wrapped up!