If you hadn’t noticed, the past couple weeks we’ve taken a break from house work so I haven’t had anything to write about. Nik was in Nashville for a week getting training in imaging mass spectrometry, then I spent a weekend in DC visiting friends, and then I spent a week in New Orleans at the American Association for Cancer Research annual meeting which was a great trip. There were over 19,000 people at the AACR meeting and I learned a bunch of stuff, and Joe Biden spoke about the state of cancer research funding at the closing ceremony which was interesting and inspiring. We also did some touristy things with the lab crew I went with, including an air boat tour in which I got to hold a baby alligator:

And we rode the St. Charles trolley and toured the beautiful garden district:

And we also checked out some of the iconic New Orleans cemeteries, which are all built above ground since the city is under sea level, so if you bury the caskets they come floating on up out of the soil over time.

On my last day there, I had a later flight getting home so I spent some time at the Audobon Insectarium and got to see some cool bugs and butterflies. I think I was the only adult there without a child, but I enjoyed myself! 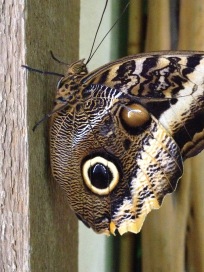 So, we were both back in town this weekend. I had a race that our friend came down from DC to run with me, but on Sunday we had some free time to get back to things. It didn’t seem like enough time to get started on our kitchen cabinets, so Nik got to work on a project he’s been wanting to do for a while, which is a front porch bench. I had seen a pic of a mid-century themed slatted bench, and I wanted one, but not for $300+:

So Nik pulled out some of the old playset wood that has been sitting under our back deck and started making some measurements and cuts.

At the end of the day we ended up with this:

We’re still figuring out how to do the legs and how to attach it all together, but I like how it looks so far! While Nik was messing with this, I went to work stripping/sanding some other old furniture pieces that have been sitting in the garage for a while that will go in our bathroom and dining room. I’ll give an update on those once they’re further along.

I also bought a rug for the living room a few weeks ago…it’s a very nice rug, and was a good price at Home Goods. We’re debating if we like the light color, and it’s a little bigger than we wanted, but I still like it and the effort to return it to the store may be swaying our opinion to keep it. The back of this room doesn’t get a lot of sun, so we thought a nice bright rug would keep the space looking light and airy. Plus, I think the wood floors are a nice contrast.

I had to try it out for plushness as well, and even though it’s wool and I’m kind of sensitive to that, it passed: 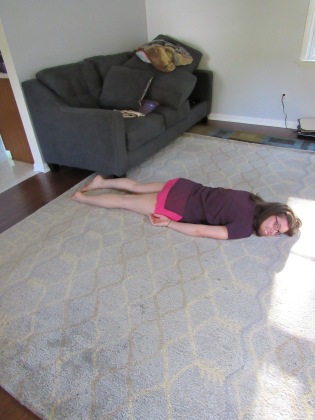 So, we have a few more days to decide about that…any thoughts?

And finally, we have a new nature update from our yard. We’ve noticed we have a red shouldered hawk (or two?) that seems to be living in our back woods somewhere. He’s made an appearance a bunch of times, and we always know when he’s coming because the squirrels go insane calling out to each other to warn of the danger. He’s maybe a foot or a foot and a half tall, and we got some good pictures of him with my camera. I like his little feet.

And I like this one, where he’s looking right at the camera with a foot in the air! 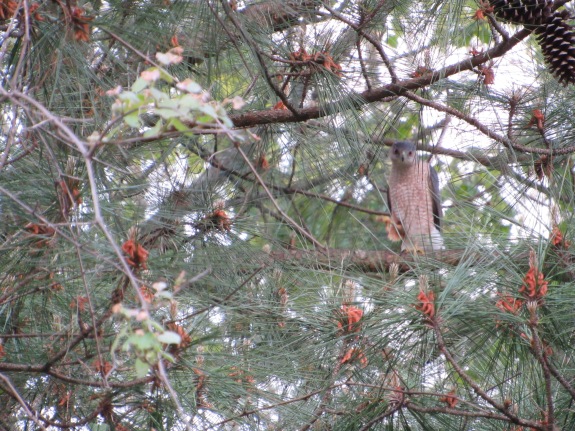 Our new bird feeder is also getting lots of attention from cardinals and chickadees, and of course the ninja squirrels who manage to get onto the feeder despite my attempts at making it squirrel proof.

This coming weekend will hopefully be productive, and if the weather’s nice maybe we’ll finally get the cabinets underway.